Get the latest updates on NC State's response to COVID-19 (coronavirus) and access resources to stay informed. Learn more here. 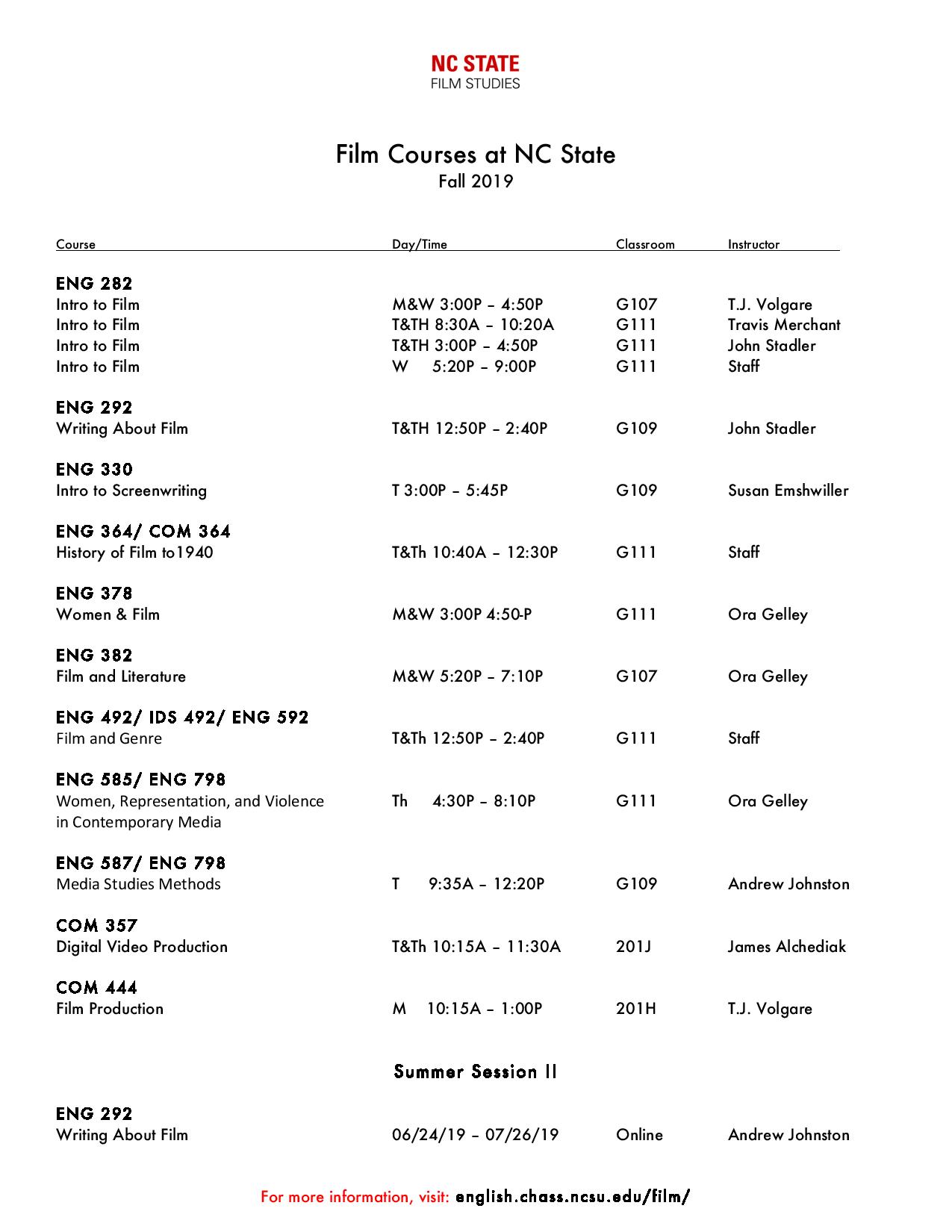 SPECIFIC COURSE DESCRIPTIONS ARE AVAILABLE AT THE ENGLISH DEPARTMENT'S WEBSITE

Writing About Film (ENG 292)
Comprehensive study of various approaches to writing about film. Primary focus is on the critical and evaluative practice involved in writing film criticism for non-academic audiences. Film screenings, discussion of assigned readings, and in-class writing workshops aid students in preparing a portfolio of film writing that includes film reviews of various lengths.

Screenwriting (ENG 330)
Through lectures, film clips, screenplay examples, collaborative brainstorming, and original writing, we will explore the craft and art of screenwriting. Students will learn about structure, characterization, creating dynamic dialogue, subtext, subplots, theme, exposition, etc utilizing established screenplay formats. The course will involve studying great films and scripts, participating in critiques, and the writing and revising of original material. At the end of the semester the students should have a clear understanding of cinematic storytelling techniques and will have completed multiple scenes.

History of Film to 1940 (COM 364/ENG 364)
Technological developments and aesthetic movements that shaped international cinema production from the beginning of the industry to 1940. Formal evolution in camera movement, editing, sound, narrative form, and the documentary. The rise to prominence of Hollywood and international cinemas in historical, economic, and cultural contexts.

History of Film from 1940 (ENG 374/COM 374)
Technological developments and aesthetic movements that have shaped international cinema production from 1940 to the present. Evolution in camera movement, editing, sound, narrative form, and the documentary. Post-war Hollywood cinema and international film industries [both established and emerging] in historical, economic and cultural context.

Women & Film (ENG 378)
This course will introduce students to women’s participation, as well as their representation, in the history of film and other audiovisual media, including television, music videos, and performance art. The course includes screenings and addresses issues such as: the gendered nature of the gaze; film form and genre; nation and postcoloniality; spectatorship; race, class, and sexuality.

Film and Literature (ENG 382)
Ways of adapting literary works to film form. Similarities and differences between these two media. Emphasis on the practical art of transforming literature into film. Attention to the impact of film upon literature.

Methods and Theories in Media Studies (ENG 587/ENG 798)
This seminar will explore key theoretical and methodological issues in media studies. We will discuss approaches, paradigms, as well as discourses about media landscapes and objects in order to prepare students to engage in various forms of research. Topics will include historiography, media archaeology, ethnographic approaches to media, cultural hierarchy and taste, formalism and aesthetics, feminist theory, and analyses of political economy and media institutions. We will engage with a variety of media, from broadcast television and cinema to mobile technologies and social networks. By the end of this course, students will have a thorough understanding of the approaches covered during the semester with an ability to engage with new approaches encountered later in their scholarship and research. Approaches to various texts and social institutions will be discussed in classes and will be used by students in a research project completed by the end of the semester.

Film Production (COM 444)
This class is on the basics of film vs digital video. You take this course because you want the training in filmmaking that utilizes film cameras and 16mm film negative. The film stock is beautiful and tends to give you a more refined image than digital can. You also learn to be much more rigorous in your choices of story and shooting.